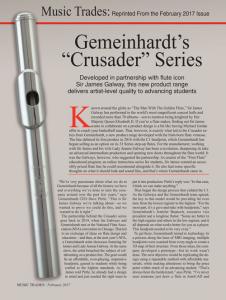 Known around the globe as “The Man With The Golden Flute,” Sir James Galway has performed in the world’s most magnificent concert halls and recorded more than 70 albums—not to mention being knighted by Her Majesty Queen Elizabeth II. If you’re a flute maker, finding out Sir James wants to collaborate on a product design is a bit like having Michael Jordan offer to coach your basketball team. That, however, is exactly what led to the Crusader series from Gemeinhardt, a new product range developed with the Irish-born flute virtuoso. The line debuted its first product in 2016 with the C1 headjoint, which Gemeinhardt has begun selling as an option on its 33 Series step-up flutes. For the manufacturer, working with Sir James and his wife Lady Jeanne Galway has been a revelation, sharpening its take on advanced intermediate production and opening new doors throughout the flute world. It was the Galways, however, who suggested the partnership. As creator of the “First Flute” educational program, an online instruction series for students, Sir James wanted an accessibly priced flute line he could recommend alongside it. He also had some specific thoughts on what it should look and sound like, and that’s where Gemeinhardt came in.

“We’re very passionate about what we do at Gemeinhardt because of all the history we have and everything we’ve done to turn the com- pany around over the past few years,” says Gemeinhardt CEO Dave Pirtle. “This is Sir James Galway we’re talking about—so we wanted to prove we could do this, and we wanted to do it right.”

The partnership behind the Crusader series

goes back to 2014, when the Galways and Gemeinhardt met at the National Flute Association (NFA) convention in Chicago. That led to an exchange of ideas on flute design and education—and then, at the next year’s NFA, a Gemeinhardt artist showcase featuring Sir James and Lady Jeanne Galway. At the same show, the artist broached the subject of collaborating on a product line. The goal would be an affordable, even-playing, responsive headjoint, geared to students while being crafted to the highest standards. As Sir James told Pirtle, he already had a design in mind and just needed the right team to put it into production. Pirtle’s reply was: “In that case, I think we can make anything.”

Thus began the design process that yielded the C1. As the Galways and the Gemeinhardt team agreed, the key to this model would be providing for even tone from the lowest register to the highest. “For the most part, it’s a give-and-take with headjoints,” says Gemeinhardt’s Jennifer Baunoch, executive vice president and a longtime flutist. “Some are better in the high register and others in the low register, and it all depends on what works better for you as a player. This headjoint needed to be very even.”

To get there, Gemeinhardt turned to technology. In a process along the lines of MRI imaging, multiple headjoints were scanned from every angle to create a 3D map of their structure. From those ideas, the com- pany developed a prototype—but its work wasn’t done. The next objective would be replicating the design using a repeatable method with affordable materials, while making alterations to bring the price point within reach of an advancing student.