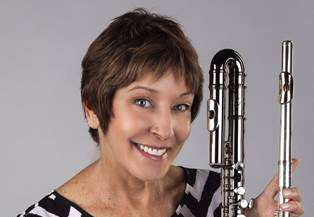 I grew up in a musical family in a small town about 40 miles outside of the city where I was born, New York City. My father, Art Ryerson, was a renowned jazz guitarist who got his start with the Paul Whiteman Orchestra, and later became one of the first-call studio players in NYC for five decades, recording with everyone from Louis Armstrong to Charlie Parker to Frank Sinatra. One might say he set the musical bar rather high for my three older brothers and me! My brothers and I first learned to play piano. Then, when my brothers became interested in playing trumpet and trombone, I asked if I could play the flute. When my parents saw how much I loved it, they bought me my first Gemeinhardt. That was over 50 years ago. I never dreamt that one day I’d be playing flutes I actually helped design for Gemeinhardt some fifty years later! (The Ali Ryerson Autograph Series) With all the amazing experiences my musical career has brought me, including countless international tours, numerous recordings on major jazz labels, performances with many of my musical heroes, playing historic venues like Carnegie Hall and The Kennedy Center, one of the greatest joys of my life has been coming home to my Gemeinhardt family. I know my father would have been very proud to know I’m a part of the Gemeinhardt Team…and that I still practice the flute, go jogging, and take spin classes almost every day!