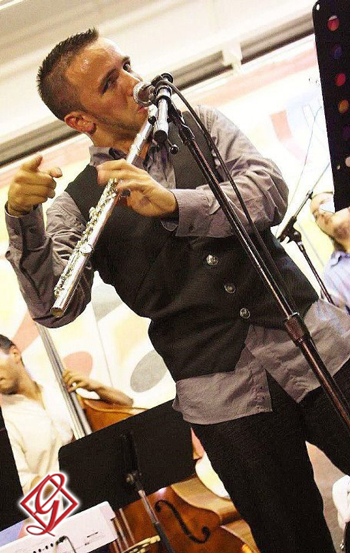 In 2000, only 10 years old and under the production of Nelson Medina and Sumando Amigos, Ernesto recorded his first solo album “El Comienzo” (The Beginning), and produced a concert in the Cultural Hall of the National Theatre for its release. Also in 2000, Ernesto had the honor of being invited by famous Jazz flutist Nestor Torres to perform with him during one of his concerts in the Dominican Republic. After these two achievements, Ernesto’s appearance in local TV, radio, and newspapers greatly increased. In 2000, he was once again invited to Miami, FL to participate in a contest for Univision’s “Sabado Gigante”.

In 2001, Ernesto produced and performed the concert “De Nino a Nino” (From Child to Child) to benefit the homeless children of the Dominican Republic through a non-profit organization called Children of the Way. In 2001, Ernesto was once again invited by Nestor Torres to perform with him during his CD release concert in the National Theatre.

Only 22 years old, Ernesto Fernandez is a young, yet accomplished flutist with a passion for music, his Cuban roots, and life.

For more on Ernesto Fernandez, visit his website at ErnestoFernandez.net.